Gold is a stable source of value with thousands of years of trust among humans supporting it,
—JP Morgan Commodities and Rates Strategist Craig Cohen[1]

Amid calls by big banks to ditch the dollar and buy gold and silver; an inverted U.S. bond yield curve; and $15 trillion worth of bonds with negative rates, the yellow metal is shining as the ultimate safe-haven asset.[2][3][4] Flirting with a six-year high at $1,518.40 and already trading above $2,000 in Canada in mid-August, gold prices keep ascending. And, the consensus among major financial institutions is that $2,000-an-ounce gold isn’t far off.

Market movements suggest more than a gold rally is upon us: silver prices broke out. Miner stocks spiked. Bulls rushed into gold and silver. With the next commodities super-cycle setting in and the downturn gripping global markets, the only question left is,

“How long do you have before affordable gold is gone?”

Spikes in gold prices in recent years have come and gone. But worsening geo-economic conditions, swiftly softening monetary policy around the world, and the breakout in mining stocks and silver prices suggest the entire market is shifting.

Bulls Race into Gold and Silver

Gold bulls have a three-pronged assault force working for them: heightened geopolitical risks, bullish technical charts and notions of easier money policies coming from the major central banks of the world in the months ahead.
—Kitco’s senior technical analyst.[7]

In the short-run, the market is a voting machine, but in the long-run it is a weighing machine.
—Benjamin Graham, British-born American investor, economist, and professor[11]

Technology’s rein in the spotlight could soon come to a screeching halt. As central banks around the world battle to increase liquidity amid tight labor markets, inflation will likely rise, triggering the next commodity super-cycle.[12]

Why Gold and Silver Prices Are Soaring

What’s really playing into people’s fears is does the depreciation of the yuan signify a larger threat to the economy.
—Ryan Giannotto, director of research at GraniteShares

The impact of the economic and political problems plaguing global economics in recent years is finally being felt in the markets.

Trade disputes between the U.S. and China escalated to the verge of a currency war as China allowed the yuan to depreciate against the dollar.[13]

Debt bubbles are getting out of control: American household debt hit $14 trillion, about $1 trillion higher than during the Great Recession, and bankruptcy filings jumped 3 percent in July 2019 from July 2018.[14]

How Much Longer Can You Afford to Wait to Buy Gold?

Negative yields are symptomatic for the search for safe assets. The reason they’re trading at negative yields is because the demand for safe assets is bigger than the supply for them. Gold stands to benefit quite a bit from that… I would argue we are likely on the cusp of a multi-year bull market for gold.
—Daniel Ghali, commodities strategist at TD Securities.[20]

What will fuel this bull market for gold?

In the coming decades we think the world economy will transition from U.S. and USD dominance toward a system where Asia wields greater power. In currency space, this means the USD will likely lose value compared to a basket of other currencies, including precious commodities like gold.
—Craig Cohen, a commodities and rates strategist at JP Morgan[21] 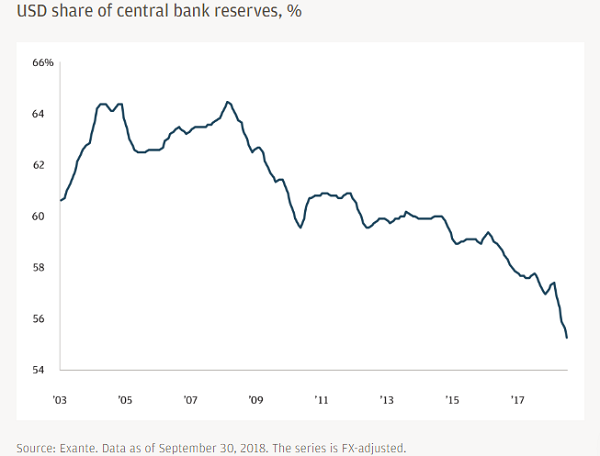 How High Could Gold Prices Go?

We do think gold is on its way higher for the time being…Over the coming years as the likelihood of the unconventional policy becomes more of a reality, I could see a case for gold at $2,000.
—Daniel Ghali, commodities strategist at TD Securities[22]

Bank of America Merril Lynch’s metals strategist Michael Widmer agrees, forecasting $2,000-an-ounce gold by the second quarter of 2020. Central banks are buying gold. Smart money is snapping up the yellow metal. Retail investors and bulls have jumped into the market. Will you buy gold before it hits $2,000 an ounce? Learn why your window for affordable portfolio protection is closing—and fast!