While gold and silver usually take the spotlight in precious metals trading, platinum is a precious metal worth watching. Our platinum price chart above reflects the spot price of platinum per ounce at any given time based on trades and spot prices in the platinum market. Our chart allows you to compare the prices of platinum vs gold, silver and palladium in the present moment, as well as historically. You also have the option to compare the price of platinum with the Dow Jones, S&P 500, S&P Euro, Gold BUGS, WTI crude oil price and the U.S. dollar index (DXY). This live platinum price chart is customizable by day, month or year, and shows highs, lows, bids and asks.

Platinum is one of the rarest metals found on earth—even though it’s plentiful on the moon! This shimmering metal is even more “precious” than gold and silver. It’s estimated that all the platinum in the world could fit into a 20-foot-square cube.

Platinum is one of the purest metals on earth, and possesses some extremely valuable qualities:

Platinum occurs on the periodic table with symbol Pt and atomic number 78.

While indigenous peoples in different parts of the world may have used platinum for centuries as jewelry and decoration, Antonio de Ulloa is credited as the first Western European to officially discover the precious metal in 1735 in South America. The word “platinum” comes from the Spanish word “platina,” meaning “little silver.” Early Europeans also called the metal “white gold” because they weren’t quite sure what it was.

Scientific experiments beginning in the 18th century have led to our current understanding of the precious metal’s valuable properties. In WWII, platinum was banned for use by the public and relegated to strictly military purposes. After the war ended and restrictions were lifted, the demand for platinum has been on the rise in the investment community.

Read more: History of Platinum as a Precious Metals Investment

The platinum spot price is calculated very similarly to gold spot price and silver spot price, updated on the minute during open market hours. The spot price is the price available for delivery now, while futures contracts are calculated for future delivery.

Platinum is an extremely rare metal with high liquidity, a fair amount of short-term volatility, and a track record of proven long-term security, making platinum both an exciting and profitable investment. A variety of industries affect overall platinum demand:

Platinum is renowned for its striking application in specialty jewelry. More than 50% of platinum is used in jewelry, so the price of platinum can be affected by changing consumer trends and demands, such as platinum becoming more fashionable. Platinum is the “greenest” of all the metals. Since the 1970s, the automobile industry has used platinum in catalytic converters to break down air pollutants. Platinum increases energy efficiency in fuel cells. Changing environmental regulations could affect the platinum price as the world “goes green,” and the automobile field accounts for a large portion of platinum demand. The medical industry uses platinum for a variety of purposes, including chemotherapy, pacemakers and stents. Further research and development could create greater demand for platinum. Platinum plays some role in electronic devices like thermometers and electrodes, which contributes to overall industrial demand for platinum. As demand for platinum increases, the supply also decreases, making this already rare metal even scarcer:

Where could platinum prices be headed in 2019? Read: Platinum Price Forecasts 2019

Is Platinum a Good Investment?

Considering the growing demand for platinum in jewelry, automobiles, medicine, and electronics, as well as the increasing interest from investors and numismatics, combined with a limited supply of this finite resource, platinum presents a unique opportunity for long-term portfolio growth.

The market for platinum is currently smaller than gold and silver, meaning there may be less liquidity but also more specialized demand. As with any precious metals investment, there is always some risk involved, but the combination of heightened demand and limited supply, as well as the safe haven qualities inherent in precious metals, makes platinum a precious metal worth considering in any investment portfolio. Platinum makes a great addition to any numismatic portfolio with high-quality investment coins such as the well-loved Platinum Eagle. Some platinum coins and bars are also eligible for inclusion in a precious metals IRA.

While gold and silver are well-known precious metals with universal appeal and high demand, platinum is one of the rarest and most exciting precious metals investments. Platinum’s metallic and electrical properties make it highly desirable in commercial and industrial applications. The metal’s beautiful aesthetic and rarity also makes it a coveted addition to investment coin collections, as well as greatly prized in fine jewelry.

Interest in platinum has been steadily increasing over the years, indicating a growing demand, while supplies are still relatively limited—platinum exists in lower quantities than gold and silver in the earth’s crust, and the amount of platinum regularly mined is only as a tiny fraction of gold and silver.

How to Buy Platinum

Platinum can be bought and sold in similar ways to other precious metals like gold and silver.

You can buy and store physical platinum:

You can buy and trade platinum on the market without physical storage: First released by the U.S. Mint in 1997, the American Platinum Eagle is the first official American platinum bullion coin. Platinum Eagles coins contain 0.9995 pure platinum and are eligible for inclusion in a precious metals IRA. The proof coin version of this coin is even more special: struck in West Point, containing the mint mark “W,” and available as a one-ounce coin, the American Eagle Proof features softly frosted, highly detailed designs with remarkable shine and luster. 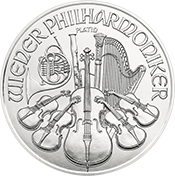 Released in 2016 from the Austrian Mint, the 1 ounce Austrian Platinum Philharmonic showcases musical instruments from the Vienna Philharmonic Orchestra on the reverse, and the Great Organ from the Musikverein Golden Hall on the obverse. This coin contains 1 Troy ounce of 0.9995 pure platinum and is currently considered to be the most popular coin in Europe.