Gold Confiscation: A Timeline of Events

History Doesn’t Repeat Itself, but It Often Rhymes
– Mark Twain

When President Franklin D. Roosevelt signed executive order 6102 (read full order here) in 1933, forbidding the hoarding of gold coin, bullion and certificates within the United States. The rationale was to remove the constraint on the Federal Reserve which prevented it from increasing the money supply during the depression. In a way this was like the modern-day QE programs that we use today.

What most people do not know is what preceded this action. The Federal Reserve Act of 1913 required 40% gold backing of all Federal Reserve notes that were issued. By the late 1920’s the Fed was in danger of hitting the limit on the number of Federal Reserve Notes it could issue based on our gold reserves.

Congress solved this dilemma by passing the Emergency banking Act of 1933 on March 9th (allegedly without reading it) and with very little debate. It retroactively approved the President’s closing of banks across the country for four days, that he had done earlier. The President had done that without providing any legal justification to do so. This act also gave the secretary of the Treasury the authority to require all individuals and corporations to surrender all of their gold coins, gold bullion or gold certificates… if the secretary deemed it necessary to protect the currency system of the United States. Apparently the private ownership of gold was thought to be a threat to our currency system?

This act also amended the “Trading With The Enemy Act” of 1917, which was designed to keep Americans from trading with the enemy. In 1918 it was amended to end two years after World War I. Everyone assumed it had ended until the Supreme Court ruled that it was still valid for other wars and hostilities. The Emergency Banking Act of 1933 expanded it to include any other period of national emergency declared by the President. So apparently, the president could now take any action on a whim?

The following month in April, using these two acts as justification, Roosevelt ordered all individuals and corporations in America to hand over their gold holdings to the federal government in exchange for an equivalent amount of paper currency, set at $20.67 per ounce of gold. This didn’t cause alarm at the time, as the paper currency they were receiving in exchange for the gold had always been redeemable in gold in the past. Little did they know, that this paper currency would soon be devalued, and no longer convertible to gold. Then on June 5th Roosevelt pushed Congress into making it illegal to require payment in gold. This was what finalized a citizens’ ability to use it as money.

To appease the public, U.S. citizens were allowed to keep a small amount of gold for “customary use in industry, profession or art”. The order also allowed any person to own up to $100 in gold coins (a face value equivalent to 5 troy ounces (160 g) of gold. Fortunately there was a paragraph exempting “gold coins having recognized special value to collectors of rare and unusual coins”. That protected recognized gold coin collections from legal seizure and possible melting. Having rare and unusual coins was the only way out of this nightmare.

Congress followed up in June of 1933, at the President’s request, making it illegal to engage in any contract requiring payment in gold. All existing agreements were now null and void. For the rest of the year, the President kept changing the price of gold, making private investment or any private loans very risky. Some historians feel this action prolonged the economic stagnation of the depression.

Eventually the Gold Reserve Act of 1934 set the price of gold at $35 per ounce. The resulting gains set up the Exchange Stabilization Fund that was established by the Gold Reserve Act of 1934. In essence the government made $14.33 profit on every ounce of gold it seized. Money they could use to retire debt and stabilize the economy. More importantly the gold hording by the US government would lead to US having by far the largest world-wide reserves which lead to the Bretton Woods Agreement in 1944. The US being the world leader in Gold holdings lead the US dollar to become the World Reserve Currency. Gold remained at that price until President Nixon took us off the gold standard on August 15, 1971. 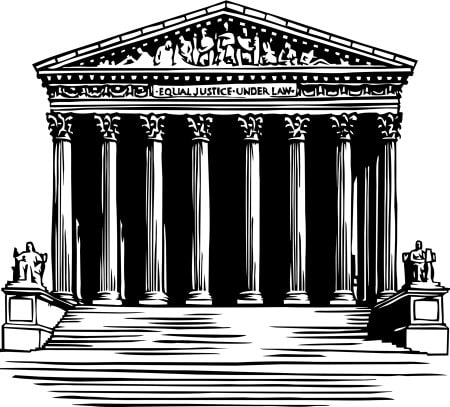 You may be wondering where the Supreme Court was in all of this?

The Court upheld all seizures as constitutional, with four justices dissenting. They became known as the “Four Horsemen” by the press, as their conservative views were in opposition to President Roosevelt’s New Deal agenda.

So why would any of this be important today?

Well, for one President Roosevelt established a method of reducing the Federal deficit, by requiring people to surrender their gold at a fixed price. He then increased the price that the government could sell it at, and used the resulting gains to pay off the debt that his administration had incurred through all the government’s spending under the New Deal. Pretty slick maneuver if you think about it. Only those with rare and unusual coins were able to escape this confiscation.

Once again incurring substantial debt through the government’s spending efforts to try and assist its citizens during the Global economic shutdowns brought on by the Chinese virus pandemic, and it isn’t just the U.S. economy doing this. Other counties are engaging in deficits as well. At some point we’re going to need a method to offset all this additional debt. Once again, governments appear to be engaging in actions that they do not have the legal authority to do. Sound familiar?

Could gold bullion be confiscated again?

Opinion: Many will argue that this could never happen again. We would agree that the chances are small that the government would seize bullion again. Let’s face it, our Keynesian economic monetary model seems to stay afloat no matter how fiscally irresponsible we have been, and currently continue to be. The leaders of the Federal Reserve make claim after claim that they can print forever and thank God for that. However, if they are wrong and our currency turns into a train wreck an eventually into a dumpster fire, then gold bullion will be seized by the government so fast that you will have no time to react.

Rare Coins aren’t just for your Grandpa’s coin collection anymore. Instead they represent full coverage money insurance protected by history and precedence of the law. The Investment Grade Coin Market a.k.a Numismatic market is not something that the government can’t take, but it’s something that they won’t take. Why? Simple it has no easy valuation of exchange with other nations and you can’t link a currency to it because of its extrinsic valuation. Plus, according to the Professional Numismatists Guild, the US rare coin market has an overall valuation of about $3.8 billion dollars. A big number for a private citizen but it wouldn’t be enough money to pay the landscapers at the White House. The multi-trillion-dollar bullion market is what they would have to go after if they needed to stabilize our currency. With that being said, no one knows for sure what will fully transpire, but we know the Government has not, and will not hesitate to take your Gold.

In the meantime we’ll leave you with a quote from Voltaire, a prolific French writer in the 1700’s. He wrote over 20,000 letters, 2,000 books, and is the father of the often quoted phrase “common sense is not so common”. His thoughts regarding money are epitomized in this famous quote:

Get our Investment Grade Coin Report Simply Fill Out This Form