What do the stock market crashes of 1920, 1987, and 2008 all have in common? October. It’s a time of the year that has historically brought spooks and frights not only to Main Street but also Wall Street.[1] And October 2018 is shaping up to be another scary month for investors.

A massive stock market selloff on the 10th and 11th finally shook the optimism that had gripped investors for a record 3,453 days.[2] It sheared 1,400 points off the Dow. The 5 percent loss the S&P 500 notched in the first two weeks of October extended to the other major indexes. Over the years, such drops in the first 10 trading days of a quarter have resulted in an average quarterly decline of 11.3 percent 79 percent of the time.[3]

A closer look at financial and economic conditions reveals there’s more working against equities than mere history. More swings in the market are on the way.

‘It is becoming clear that global equity markets are facing a perfect storm of headwinds such as rising U.S. bond yields, U.S.-China trade disputes, global growth concerns and prospects of higher U.S. interest rates. For as long as these themes remain, appetite for stocks are likely to diminish further consequently fueling speculation over the bull party coming to an end,’ explained research analyst[4] at FXTM, Lukman Otunuga.

The prospect of a higher cost of borrowing panicked investors and elicited the President’s disapproval in the second week of October.

After slashing its key interest rate to zero during the 2008 financial crisis, the Federal Reserve has been steadily bringing it back up. It raised rates three times in 2018 to a range of 2 percent to 2.25 and projects three more increases in 2019.[5][6]

On October 10th, President Trump responded to the stock market selloff by criticizing the Fed: “monetary policy is ‘so tight. I think the Fed has gone crazy.’” During an interview with Fox News later that day, he reiterated this sentiment in Spanish: “The central bank ‘is going loco and there is no reason for them to do it.’”

Although investors found the President’s statements somewhat hyperbolic, they agreed with their meaning: ‘There is no doubt in my mind that this panic is all about Federal Reserve interest rate policy… The president should have chosen a better term than crazy (or as he also referred to the Fed as loco) but his sentiment is 110 percent correct,’ said the president of LakeView Asset Management, Scott Rothbort.[7]

Steeper interest rates also increase the interest payouts on bonds, making them more competitive with stocks, and drag down growth stocks, such as popular tech picks Netflix, Facebook, and Apple.[8]

Lastly, higher rates make debt more expensive to service. Since the Fed dropped rates to near zero in 2008, the U.S., as well as countries around the globe, has accumulated massive amounts of cheap debt. And this burden could become unmanageable as rates rise, which is one reason the IMF predicts the next financial crisis could be worse than the last—and even harder to recover from. 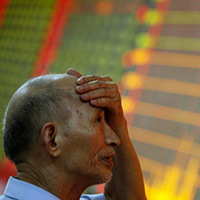 Political problems across the globe could put further pressure on U.S. economic growth. Jamie Dimon, the CEO of J.P. Morgan Chase, recently described the situation as ‘increasing geopolitical issues bursting all over the place.’[9]

Among the issues Dimon cited were the tightening of monetary policy by central banks around the world, the trade dispute with China, Brexit, and “flareups across Europe, the Middle East and Latin America including Italy and Turkey.”

Dimon isn’t alone in his concern over the tense geopolitical climate. The Eurasia Group recently predicted[10] that this year will be the “geopolitical equivalent of the 2008 financial meltdown.” Ian Bremmer, the group’s president and a prominent political scientist, warned that the ‘global order is unraveling.’

China topped the list of the Eurasia Group’s geopolitical risks in 2018. The country’s economic might coupled with its insatiable appetite for technological and political power underlie the threat it poses to the rest of the world.

Other risks on the list included a global tech cold war, Mexico, U.S.-Iran relations, protectionism, and the United Kingdom. Read more about the possible impetus for U.S. protectionism in “Is President Trump Telling You to Buy Gold Now?”

Many experts view China as a major threat—with or without President Trump spurring trade disputes.

“‘We’re at risk of a real cold war’ between the world’s two biggest economic superpowers,” asserted former Fed governor Keven Warsh[11]. Unlike the nuclear stalemate that defined the cold war between the U.S and Russia for decades, Warsh is using the term to describe an economic standoff, with trade tariffs instead of missiles serving as the weapons. The crux of the problem, however, parallels the last cold war: communism versus democracy.

The CIA’s Michael Collins, agrees, arguing that the “goal of China’s influence operations around the world is to replace the United States as the world’s leading superpower”: ‘At the end of the day, they want every country around the world, when it’s deciding its interests on policy issues, to first and foremost side with China and not the United States.’[12]

While the threat of China usurping the United States’ global economic and political hegemony is frightening, the harmful economic consequences of the ever-escalating trade war are already starting to be felt by businesses. Already, BMW AG reported having to have to raise prices on the U.S.-manufactured cars it sells in China due to the levies.[13] Ford indicated that its costs would likely jump by $1 billion due to a separate set of taxes on steel and aluminum that the Trump administration imposed this spring.

These companies and those in similar positions can either absorb these extra expenses or pass them onto Americans, who will already pay more for the consumer goods targeted specifically by the latest round of tariffs. Recent statements from major U.S. retailers suggest consumers will be hit hard by the tariffs. ‘No retailer will be able to simply absorb the cost of a 10 percent tariff, much less a 25 percent tariff in today’s ultracompetitive retail environment. That means consumers will pay higher prices,’ wrote David M. Spooner, counsel for JCPenny, in a letter to U.S. Trade Representative Robert Lighthizer. A statement from Walmart echoed this view.

The toll to American pocketbooks could be greater than that imposed by the taxes levied to fund Obamacare, found a report by the National Taxpayers Union Foundation.

The latest round of tariffs could tack on as much as .5 percent to the headline CPI inflation rate, argued Pantheon Macroeconomics economist Ian Sheperdson.[14] ‘When you have the world’s two largest economies at odds, that’s a situation where everyone suffers,’ explained the IMF’s chief economist, Maurice Obstfeld[15].

Could the trade war trigger another recession? Find out in “When Will the Economy Crash?”

Both the European Central Bank and the IMF foresee the trade war causing increased volatility in the equities markets. As the global economic outlook dims, investors could lose confidence, which would hurt the stock and bond markets.[16]

‘An intensification of trade tensions, and the associated rise in policy uncertainty, could dent business and financial market sentiment, trigger market volatility, and slow investment and trade,’ said the IMF.

As with other analysts, the IMF views the effects of the trade war to the economy to be especially problematic when the financial benefits from the tax cuts and stimulus measures wear off by 2020.[17]

How Can You Protect Your Retirement Savings?

While day trading isn’t a pastime for the average American, most do hold stocks and bonds in their individual retirement portfolios. The coming period of prolonged market volatility has changed the forecast for these types of investments.

Investors can start by making sure their savings aren’t tethered tightly to the market via paper assets. Diversifying your portfolio with investments that are negatively correlated to stocks and bonds can ensure it doesn’t swing dramatically in value with the markets.

A self-directed IRA allows the inclusion of alternative investments, such as precious metals and real estate. With rising interest rates bringing up the cost of mortgages, real estate isn’t an ideal choice, though.[18] On the other hand, precious metals are immune to the effects of increasing rates, inflation, and financial and economic crises, making them the perfect portfolio diversification tool.

Gold has served as a store of value for centuries and can protect your retirement savings from the coming financial upheaval. After dipping over the summer, gold prices are rising. Now is the time for investors to seek the safety of a gold IRA before the price of gold soars.

Scottsdale Bullion & Coin is here to help you with the IRA process. During the month of January, we’re waiving all setup fees on Precious Metal IRA rollovers and transfers with the purchase of PR American Eagles. Making now an best time to protect your retirement with a Precious Metals IRA.

Hurry! This offer and bargain precious metals prices will only be here for a limited time.