The American Gold Buffalo proof coin, the first nearly pure gold coin struck by the U.S. Mint, celebrates the rugged beauty of the land that lured thousands of prospectors and made even more rich: the American West.

The Story Behind the American Buffalo Gold Coin

The American Buffalo Gold coin derives its design from the popular 5-cent coin that was known as the “Indian Head” or “Buffalo Nickel.” Gifted American sculptor James Earle Fraser created the artwork for the Buffalo Nickel. A former student of legendary sculptor and 1907 Double Eagle coin designer Augustus Saint-Gaudens, Fraser employed three American Indian chiefs—Big Tree of the Kiowa tribe, Iron Tail of the Oglala Lakota tribe, and Two Months of the Cheyenne tribe—as models for the profile of the Native American man on the coin’s obverse side. For the profile of a buffalo on the reverse side, Fraser sought out a much more menacing subject: Black Diamond, the resident bison at the New York Zoological Gardens.

The U.S. Mint first issued the Buffalo Nickel in 1913 and struck more than 1.2 billion until 1938, when it was replaced by Felix Schlag’s Jefferson nickel. For the American Buffalo Gold coin, the Mint opted to emulate the version of the Buffalo Nickel with the bison standing on a dirt mound instead of the one with the robust mammal on a thinner, straight line.

Originally created in 2006 to compete with foreign 24-karat gold coins like the Canadian Gold Maple Leaf and the Chinese Gold Panda, the American Gold Buffalo coin is the first ever coin minted by the U.S. government for public distribution that is virtually 100% pure gold. American gold coinage, such as American Gold Eagle coins, is generally struck at .9167 purity (22-karat); the Buffalo Gold coin is minted at an astonishing .9999 pure gold (24-karat). No American gold coin is purer than the Gold Buffalo. Since 2006, the U.S. Mint has offered a bullion and a proof version of the American Buffalo Gold coin. Proof coins undergo a specialized minting process that produces more detailed images and a finer finish. In the case of the Gold Buffalo, the Indian and Bison profiles appear more raised and frosted, while the backgrounds boast mirror-like reflectiveness.

Engravings of “United States of America,” “In God We Trust,” and “E Pluribus Unum” articulate some of the country’s foundational principles that the bison—now the national mammal—symbolizes on the reverse side. On the obverse side, “Liberty” is inscribed above the American Indian man’s head. The proof version bears a “W” on the front of the coin, indicating it was minted at West Point, while the bullion one does not.

Historic, beautiful, and valuable, it’s easy to see why the American Gold Buffalo coin is a collector favorite.

Fun Fact: The Presidential 41 Coin Act, passed December 2005, mandates all gold used in the production of American Gold Buffalo coins must come from newly-mined sources within the borders of the United States. 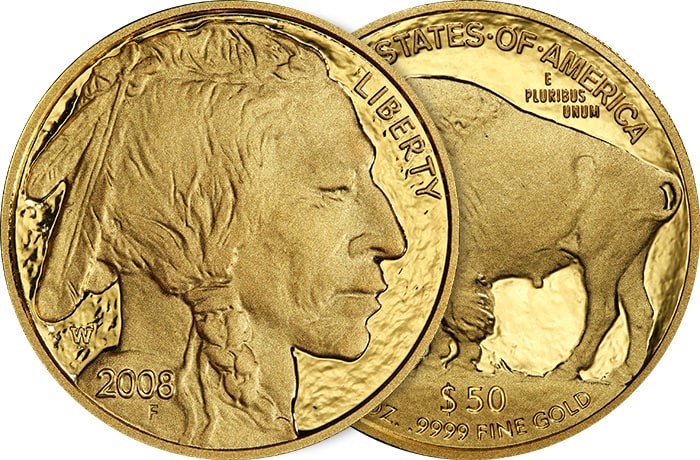 Add an American Gold Buffalo to Your Collection

Seize a little piece of American history today by adding the American Gold Buffalo coin to your collection. Amassing proof coins can not only be exciting, since many carry fascinating stories like the Gold Buffalo coin, but also profitable. To learn more about this coin or others, contact an SBC Gold consultant who will answer your questions and even provide valuable resources.