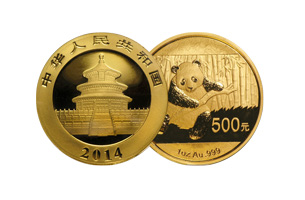 The first Gold Panda coin was produced in 1982 in sizes of 1, ½, ¼, and 1/10 oz, while the 1/20 oz size was added a year later. In the following year, the Chinese mint also produced larger coins in sizes 5 oz and 1kg, the so-called Prooflike Brilliant Uncirculated. The Gold Panda coin bears a different design every year, although the changing designs were stopped in 2001. However, the Chinese government re-authorized them again in 2003 after collectors spoke out in favor of alternating designs. The Chinese mints that produce the Gold Panda coin are located in Beijing, Shenzhen, Shanghai and Shenyang, among others. Unlike, for example, U.S. American coins, Chinese coins don’t normally carry mintmarks indicating their origin. In some cases, minor variations like the size of the date or the style of the temple reveal where the coin was minted.

The obverse side of the coin shows the Hall of Prayer for Good Harvest in the Temple of Heaven in the center. The Mandarin inscription “Zhonghua Renmin Gongheguo” (“PEOPLE’S REPUBLIC OF CHINA”) is to be found on top, while the year of issue can be seen on the bottom. The reverse side depicts different portraits of a panda that change every year (except for 2001 and 2002), the denomination, as well as the coin’s weight and purity. For example, the 2014 Gold Panda coin depicts a panda sitting in the grass in front of a row of bamboo trees, holding a branch.

The Gold Panda is a great coin for collectors and investors alike, as it is affordably priced and may increase in value tremendously over the next years and decades. This coin is very distinctive in its features: The 99.9% purity of the coin’s gold gives it a very deep, rich appearance that make its design “pop out”, while the alternating Panda design is uniquely conceived by expert Chinese craftsmen each year. The official distributor of the Gold Panda coin in the U.S. is Panda America.