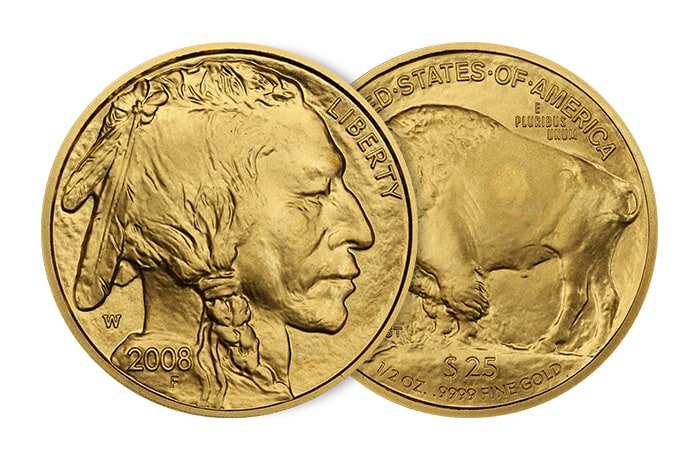 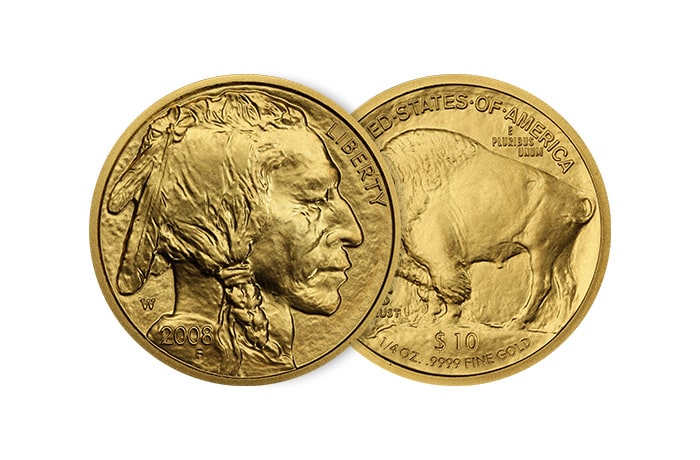 The design of the American Buffalo is a modified version of James Earle Fraser’s design for the popular America’s five-cent-coin, known as the “Indian Head” or “Buffalo Nickel,” which was minted from 1913 to 1938. The obverse side shows the profile of a Native American man, who, according to Fraser, was modeled after three different chiefs, Big Tree (Kiowa Tribe), Iron Tail (Oglala Lakota Tribe), and Two Months (Cheyenne Tribe).

In addition, the obverse side features the inscription LIBERTY as well as the year of minting.

The reverse side shows the silhouette of an American Bison standing on a pile of dirt in profile. The bison is supposedly modeled after “Black Diamond,” popular attraction in the New York Zoological Gardens in the early 20th century. The reverse side also features the inscriptions UNITED STATES OF AMERICA, IN GOD WE TRUST, E PLURIBUS UNUM, and $50 1 OZ. .9999 FINE GOLD.

Furthermore, the proof coin version of the Buffalo Gold coin bears the mint mark “W” on the front, while the bullion coin version does not have the “W” mint mark.

Each American Buffalo coin has a purity of .9999 gold.

Many investors prefer pure 99.99% gold over the 91.67% gold used in the Gold American Eagle; thus, they choose non-U.S. fine gold coins to meet their bullion needs.

With the introduction of the American Buffalo gold coin, the U.S. government hopes to stimulate U.S. gold sales and profit from the 24-karat gold bullion coin market that is estimated at $2.4 billion. The American Buffalo gold coin offers investors all the security, liquidity, and protection of a world-class gold coin while being backed by the U.S. government. Moreover, the gold Buffalo bullion coin version may be placed in a gold IRA (Individual Retirement Account).