After celebrating the longest bull run on record last August, the stock market suddenly took a turn for the worst this week. In just two days, the Dow dropped 1,378 points, the S&P 500 notched six straight sessions of losses, and the Nasdaq briefly fell into a correction. Across the board, the major indexes shed more than 5 percent.[1]

The big question on the minds of startled investors and financial analysts is, “How long will the stock selloff last?” Was this a mere bout of market volatility or the beginning of a much bigger problem: a bear market and recession?[2]

What’s Behind the Stock Market Volatility?

Historically, the spookiest month of the year for children has also been quite frightening for Wall Street players.

Similar to October 2008, however, there are darker undercurrents in the markets signaling this rout of volatility could be the beginning of the end of the bull run.

History shows us that bull markets and economic expansions don’t die of old age. They get shot in the head by the central bank
-Scott Minerd, Guggenheim Partners CIO[6]

The consensus among investors and analysts—and, of course, the President—is that the Federal Reserve is to blame for the stock selloff.

Following the close of a harrowing trading day on Wednesday, President Trump remarked to reporters that ‘the Fed is making a mistake.’[7]

Trump’s statement echoed investor sentiment. The latest survey by RBC Capital Markets found that more than 50 percent of respondents think there is a moderate to high risk of Fed policy error on the horizon. 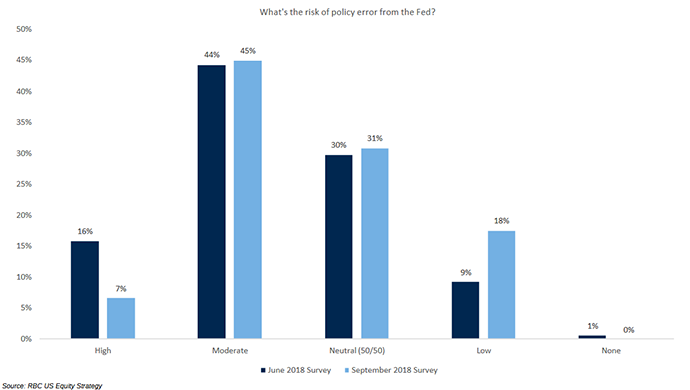 Many investors fear that the Fed’s policy of raising interest rates will increase the cost of borrowing and labor, thereby shrinking corporate profit margins and triggering the predicted recession. This is prompting investors to unload stocks and bonds and bond yields to spike. The 10-year Treasury note, which is used to price auto loans, mortgages, and other forms of debt, saw its yields hit a seven-year peak this week.[8]

Scott Minerd, the CIO of Guggenheim Partners, expects the stock market will pull back by 40 percent from its highs by 2020 due to recession and fiscal drag.[9] With the International Monetary Fund recently lowering its 2019 growth projections for China and the U.S. due to the trade war, such predictions aren’t that farfetched.[10] Read about how the trade disputes could hurt the economy in “Why Buy Gold During a Trade War?”

How Did Gold Prices React? They Soared! True to form, when financial crisis erupts at home, investors run for the ultimate safe haven: gold. Spot gold prices surged by more than $30 an ounce on Thursday, October 11, 2018. As prices for the yellow metal hit their highest in more than two months, expert predictions for a strong close to 2018 poured in.

‘Gold is a natural safe haven and has been very out of favor for a while. I think we could see a rally to $1,300 at some point before year end,’ said the managing partner at Altavest, Michael Armbruster.

Read more about what analysts are predicting for gold prices this year in “Gold Price Forecast 2018.”

What Can Investors Do to Protect Their Portfolios?

While October may be a historically shaky month for the markets, there are too many parallels between 2008 and 2018 to ignore—namely, economic conditions ripe for a recession.

Looking back at the losses, this rout of market volatility should not be ignored because there’s a big chance it could foretell more troubles ahead. During the Great Recession, the Dow dropped 50 percent in 17 months and the S&P 500 plummeted 56 percent.[11]

It could, and likely will, happen again. That’s why smart money is selling off stocks and moving into physical precious metals. Sales have skyrocketed 126 percent!

If you haven’t taken advantage of the recent pullback in gold prices, now is the time. Prices are already jumping.

Scottsdale Bullion & Coin is here to help you secure your retirement nest egg before the predicted financial crisis and recession hits. For a limited time, we’re waiving all setup fees on

Precious Metal IRA rollovers and transfers with PR American Eagle Purchases. Call us today at 1-888-812-9892 before the price of gold skyrockets!