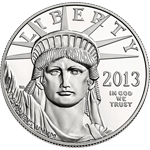 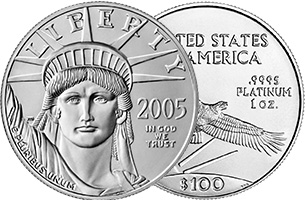 The platinum American Eagle is the official American platinum bullion coin and was first released by the U.S. Mint in 1997. The platinum Eagle is available in four sizes: 1 oz, ½ oz, ¼ oz and 1/10 oz. It is the only platinum bullion coin the United States Government guarantees for weight, content, and .9995 purity. As the American Eagle platinum is considered a commodity rather than a coin, it may be placed in a Precious Metals IRA (Individual Retirement Account) in the U.S. Normally, collectibles like rare coins are exempt from being held in IRA accounts.

The obverse design of the platinum Eagle displays a portrait of the Statue of Liberty and the inscriptions LIBERTY, IN GOD WE TRUST and E PLURIBUS UNUM, as well as the year of minting. The reverse side shows the inscription UNITED STATES OF AMERICA, as well as the weight and face value of the coin. In addition, the reverse design of the uncirculated as well as of the proof version of the American Eagle platinum is unique in that it changes each year under a program called “Vistas of Liberty.” The platinum Eagle is the only American bullion coin whose reverse design is different every year. The designs typically feature different regions of the U.S. and variations of the American Eagle. From 2006 to 2008, for instance, the reverse side “The Foundations of Democracy” was issued to represent the three branches of government.

The fractional platinum Eagle coins are all identical to the 1 oz coin except for the reverse markings indicating weight and face value. The face values of the coins are $10, $25, $50, and $100, which are their legal values reflecting their issue and monetized value. Furthermore, they are legal tender for all debts public and private at their face values. One-ounce platinum American Eagles are sold in units of 10 one-ounce coins. Yet, these face values do not reflect their intrinsic value, which is much greater. For example, the 2012-W platinum Eagle proof coin was offered by the U.S. Mint at $1,792.00 (briefly after its release in August 2012), which makes it one of the U.S. Mint’s most expensive products.

Only the 1 oz American Eagle platinum coin is available as a proof coin. “Proof” means that the coin was produced in a particular manner. Burnished coin blanks are manually put into presses with special dies, and then each coin is struck repeatedly. This results in softly frosted, but detailed features that give the impression of floating over a mirror-like surface. The American Eagle platinum proof coin is struck in West Point and features the “W” mint mark. It first debuted in 1997.

All four denominations were offered by the U.S. Mint for both bullion coins and collectible proof coins from 1997 to 2008 and for collectible uncirculated coins from 2006 to 2008. Since 2009, the U.S. Mint has only produced one 1 oz proof versions of the coin. Platinum Eagle coins are popular among coin collectors, especially because of their yearly changing reverse sides. Not only are American Eagle platinum coins eligible for placement in a Precious Metals IRA, they are a great investment alternative to gold.