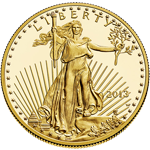 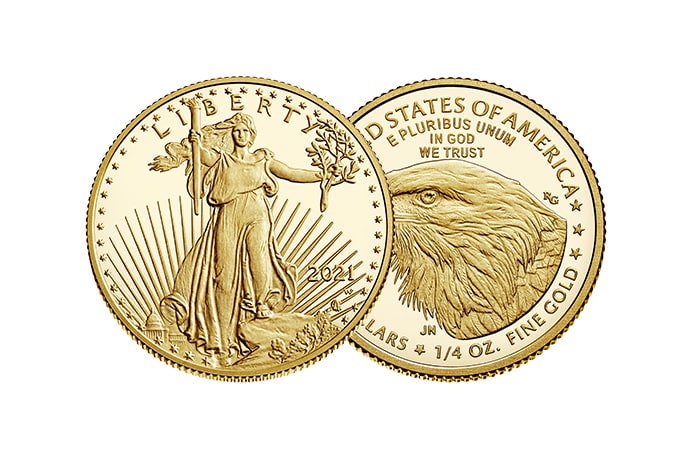 The American Eagle Gold Coin is an official American gold bullion coin and was introduced in 1986 by the U.S. Mint, after the release was authorized by the Gold Bullion Coin Act of 1985. The American Eagle is available in four sizes: 1 oz, ½ oz, ¼ oz and 1/10 oz. The U.S. government guarantees that the coins contain the stated amount of actual gold weight in troy ounces. Law also requires the gold to come from American sources, alloyed with silver and copper in order to be more wear-resistant.

The obverse side of the coin features Lady Liberty with flowing hair, holding a torch in her right hand and an olive branch in her left (design by Augustus Saint-Gaudens). It also features the inscription LIBERTY as well as the year of minting. The reverse side shows a male eagle carrying an olive branch while flying over a nest with a female eagle and hatchlings (design by Miley Busiek).

In addition, the reverse side features the inscriptions UNITED STATES OF AMERICA, IN GOD WE TRUST, and E PLURIBUS UNUM, as well as the weight and face value. As the American Eagle Gold is a popular collector’s item, the U.S. Mint also produces a proof version at the West Point Mint in West Point, NY, which carries the mint’s mark “W” beneath the date.

The New Reverse Design for the 2021 American Gold Eagle Coin A colorized version of the reverse design for the new 2021 American Gold Eagle Coin 1 oz.

American Eagle Gold Proof Coins are a limited and higher quality version of the regular American Eagle Gold bullion coins. “Proof” refers to a special minting process that starts with manually feeding burnished coins blanks into presses fitted with special dies. Then, each coin is struck multiple times, which results in the softly frosted, yet sharp images seemingly floating above a mirror-like field. They are available in four sizes, 1 oz, ½ oz, ¼ oz, and 1/10 oz. Proof coins can be purchased either individually or in a four-coin proof set. It is important to note that American Eagle Gold Proof coins come in limited mintages. Struck at the mint branch in West Point, proof coins bear a W mark. Even though the value of the coins fluctuates with market dynamics, gold is regularly in demand on the world markets. The American Gold Eagle is a good investment option for financial security, stability, and liquidity while also eligible for placement in a gold IRA (Individual Retirement Account). Coins minted from 1986 to 1991 are dated with Roman numerals, whereas coins minted since 1992 are dated with Arabic numbers.

All gold eagle coins are identical in design, except for the markings indicating the weight and face value of the coin. The face values of the coins are $5, $10, $25, and $50, which are their legal values reflecting their issue and monetized value. The face values are proportional to the weights, except for the ¼ oz coin. Furthermore, they are legal tender for all debts public and private at their face values. However, these face values do not correspond to their intrinsic value which is much greater and is determined through their troy weight and current gold price. For example, in 2012, the U.S. Mint sold the 2012 ounce coin, whose face value is $50, at $1,835.00.