Throughout history, collectors have always had an eye for the finest examples of any minted coins. As early as the Roman Empire, there were individuals who built collections of coins based on their artistic quality, geographic origin, or other characteristics. Ultra cameo, or deep cameo, coins are a special type of coin that possess a rare and unique beauty. Let’s take a look at what this designation means.

While early coins were often quite intricate, the processes for producing truly fine specimens were quite limited. By the 18th century the field of numismatics was large enough and technology was advanced to a level that mints started producing coins for specific niches. Coins produced for private collectors involved taking special steps to produce better dies, striking multiple times, and avoiding nicks and defects common in everyday coinage.

In 1907 the U.S. mint introduced the $20 Saint–Gaudens Gold Eagle, considered one of the most beautiful coins ever designed and minted. 1 However, the very nature of this coin’s ultra high relief design made it impractical for normal commercial use and resulted in a redesign. Ultra high relief coins occupy a specialized niche in coin collecting, much like cameo coins.

What Does Cameo Mean?

Proof coins are produced with extra care and attention for superior quality; coins are specially struck to create a mirrored image. Some of the first designated proof coins were made in the 1950s and 1960s by polishing specially etched and prepared dies. Some of these early sets produced what were called “frosted” images, with high contrast between the polished fields and the reliefs.

The term “cameo” means that a coin has a light to moderate frosting on both sides. This is in contrast to what is known as a “brilliant proof” coin, in which the coin displays a brilliant mirrored finish, rather than a frosted finish. One you see the coins side by side, you’ll quickly recognize the difference in brilliant proof coins from those considered cameo.

To receive the official Numismatic Guaranty Corporation (NGC) or Professional Coin Grading Service (PCGS) designation of a cameo coin, the devices on each side (obverse and reverse) of a coin must have at least a light frosting, accented by a reflective field. These coins are often quite beautiful and are produced with a wide range of subjects and figures.

If a coin is to receive ultra cameo (also called deep cameo) designation, it must possess an intense frosted finish on both sides of the coin and highly polished fields accenting the raised devices. The requirement for consistent and exceptional frosting in all areas and details of the coin is essential to earn and maintain the grade of ultra cameo. 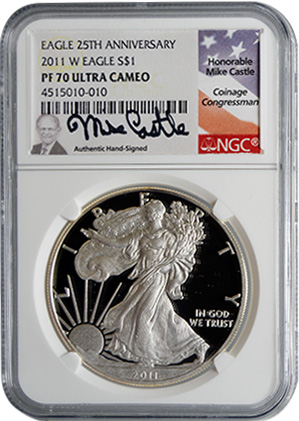 Ultra cameo coins are even more pronounced because they are the first coins minted in a set. Proof coin dies quickly lose their ability to make this beautiful cameo finish after printing only a few hundred coins. This method of minting makes ultra cameo coins inherently more rare than the coins minted later in the set. There is an active market for such cameo coins, which often command a higher market price than their intrinsic gold or silver value. Current mints can only offer coins that will be graded ultra cameo by taking a number of special steps in the die creation and minting process. These coins are produced at a much slower rate and are never touched by human hands or other coins.

The number of deep cameo coins minted before the 1970s was limited to a few hundred out of the thousands of each coin produced. Those have special value today. However, there are also a number of limited edition ultra cameo coins produced today, including the 1995 American Gold and Silver Eagles and the Franklin half.

Numismatics and gold bullion buyers alike pay special attention to the grading of the coins they buy due to its role in establish value and marketability. The NGC assigns the grade of ultra cameo to specially minted coins that meet the requirements of their grading criteria. Until recently, only U.S. minted coins earned this designation.

Today’s technology allows mints to produce coins with exquisite detail and beauty. These coins are not intended for general circulation; rather they are produced for sale as a way to buy physical gold and silver other than as bullion bars. Many individuals who buy gold see it as more fungible when held as a coin. Numismatic coins also have additional value on top of the weight of the precious metal.

Generally speaking, the higher the grade earned by a coin, including the designation as an ultra cameo, the higher its desirability and value. Graded coins that are certified as MS70 (the “perfect coin”) and from limited series have the highest value above their intrinsic metal content, and are considered by many to be superior investments with greater potential for appreciation.

Cameo and ultra cameo coins are undoubtedly arresting in their unique beauty, and are often highly prized additions to a numismatic collection.