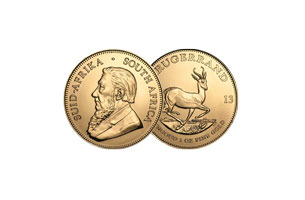 Since September 1980, the coin has also become available in three different sizes containing exactly 1/2 ounce, 1/4 ounce and 1/10 ounce of pure gold. The Krugerrand is guaranteed as to weight and gold content by the South African government.

The obverse side of the coin features a profiled bust of President Kruger, as well as the name of the country in its two official languages, English (“SOUTH AFRICA”) and Afrikaans (“SUID AFRIKA”).

The reverse design shows a springbok antelope, one of the national symbols of South Africa, which was originally used on the South African 5-shilling piece. The reverse side also features the year of minting and the coin’s fineness.

In 2018, the South African Mint and Rand Refinery used this same coin design to manufacture the silver Krugerrand coin.

Each gold krugerrand coin is minted from gold alloy that is 91.67% pure (22 karats).

The Krugerrand does not have a face value. Its legal tender value is the bullion value of gold at its current market price. It was the first bullion coin whose legal tender value was determined only by the bullion value of its metal content. The coin was initially introduced as an opportunity for private investors who wished to own gold. As the Krugerrand was legal tender in South Africa, the gold coin could be used for portfolio diversification in the United States, where private ownership of gold bullion was prohibited, but ownership of foreign coins was permitted. Even though the Krugerrand accounted for 90% of the global gold coin market by 1980, many Western countries banned the coin during the 1970s and 1980s due to the economic sanctions against South Africa for its apartheid policies. This ban was lifted in 1994 when South Africa ended the apartheid regime.

A Popular Coin for Gold Investors

The South African gold Krugerrand is one of the most popular coins among collectors. They are durable, easy to transport and store, and easily tradable because they are so well recognized.