The Consumer Price Index (CPI) jumped a bigger-than-expected 0.6% in March, pushing the annual inflation rate to a five-year high of 2.5%. Though still not at levels seen before and during the Great Recession, the impact can be felt in rising consumer prices for things like food, gas, and apparel. In addition, U.S. wholesale prices rose 0.3% in February, increasing the costs of things like financial advice, legal help, and travel.

And another measure of inflation, the Producer Price Index (PPI) pushed the rise in wholesale prices over the last year up to 2.2%, the highest since March 2012. The country is seeing higher costs for housing, mortgages, rent, and medical expenses.

The PCE is the Fed’s preferred inflationary measure, and it posted gains of 0.1% in March after jumping 0.4% in February to reach a year-over-year increase of 2.1%, the highest since April 2012.

The Federal Reserve Bank of St. Louis’ 5-Year Breakeven Inflation Rate, another measure of expected inflation, is 1.89%, at the highest levels seen since mid-2014.

Since global oil prices have been on the rise, the annual inflation rate in the developed world reached 2.3% in January 2017, the highest rate since April 2012, according to the OECD.

Why Isn’t Inflation a Sign of a Recovering Economy?

Rising prices often go hand in hand with faster economic growth, but that’s not what’s happening now. According to the Organization for Economic Co-operation and Development (OECD), the global economy will be stuck in low gear through next year, and U.S. GDP growth isn’t expected to top 2.8% even by 2018.

Some analysts remain optimistic about the state of the economy. Theoretically, as interest rates increase, inflation should decrease as people borrow less and save more. The key word here is theoretically.

Some, like Charles Bobrinskoy, head of investment group at Chicago-based Ariel Investments, is critical of low inflationary predictions. He points to a few reasons that inflation will continue to rise, such as a strengthening economy, higher interest rates, high volume lending, extreme cash flow, and higher labor costs. Perhaps most significantly, he said:

“We have the first president who’s ever tried to talk down the value of the U.S. dollar; that’s never happened before. And the dollar going down is what inflation is all about.”

Inflation has been very low since the Great Recession, with lawmakers and economists more worried about falling prices. As the Federal Reserve positions itself to continue raising interest rates, inflation will likely increase, even if the American economy isn’t positioned well to deal with it. Think about it: as prices for goods rise, while the dollar weakens, consumers won’t be any better off, especially with national and consumer debt at record levels. Inflationary spending is one of the problems that created the Great Recession in the first place, and it is beginning to look like a pattern is repeating itself.

What Does This Mean for Gold?

Higher inflation translates to weaker currency. As currency fails, gold rises in value as a safe haven store of security and true wealth. Gold and silver are classic protections against rising inflation.

Ronald-Peter Stoeferle, who manages over 100 million Swiss francs ($101.5 million) in the Incrementum Inflation Diversifier Fund, sees gold rising to $1,400-$1,500 per ounce this year. He notes:

Though the general sentiment in the marketplace right now may be one of optimism, it could be dangerous for the American public to let their guard down so easily. While we all surely want a recovering economy, it’s tempting to believe everything is on the up-and-up. A word of caution to the wise: Think long-term about wealth investment, and pay attention to the large-scale signs of financial health. Inflation is rising, debt is still out of control, the dollar is weak and even possibly being pushed down, and there are significant hurdles still in place from the years (decades) of irresponsible government lending. Still, there is nothing backing the paper currency system other than faith in the word of the government.

With predictions of higher gold prices in the future, now is a smart time to make a move into building wealth stability and protecting against rising inflation. With gold prices around $1,200 per ounce, and reasonable potential for big gains this year, consider adding gold and silver to your portfolio before April 18 to take advantage of significant tax benefits. Until the economy is truly stable and growing, gold is a wise investment to protect against instability and destructive speculation.

Time Is Running Out!

It’s that time of the year again! The tax deadline is April 18th, and we want to make tax season as beneficial for you as possible, so right now, when you invest $5,000 in proof coins to your self-directed IRA, we’ll give you a FREE 30th Anniversary American Silver Eagle Proof Coin. Consider it a gift to yourself for making a smart investment move.

Enjoy the benefits of adding gold and silver to your IRA: 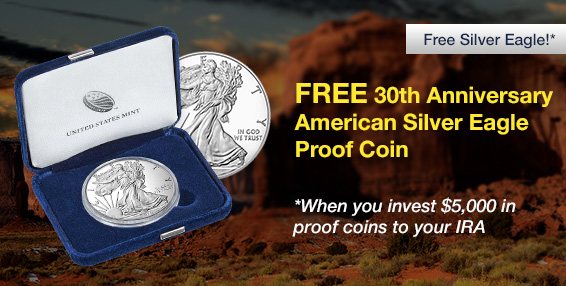 HURRY! The Deadline to Make Your Contribution & Receive Your Free Coin is April 14th, 2017.