Throughout the course of history, gold has earned its place as a universal indicator of wealth. Part of the reason for its value is its stability, as its price only fluctuated a few dollars throughout the 1800s and early 1900s. Since then, the price of gold has increased with greater frequency, and from 2002 to today it has more than quadrupled in price. But how exactly have gold prices changed? And what may have caused this surge in value? This article will give you the low-down of gold’s historical prices, especially within the past decade.

In 2002, a 24K Troy ounce of gold would cost you just under $300. Today, that same troy ounce will cost $1,500 or more. If you would like to look further into the drastic increase in gold prices, check out the chart below. 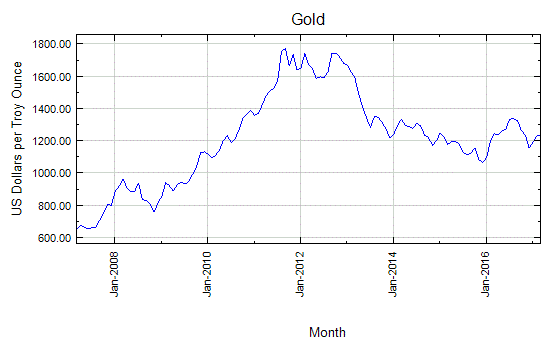 A troy ounce is not the same as a standard, or avoirdupois ounce. Whereas the standard ounce consists of 28 grams, a troy ounce adds up to 31.1034768 grams. Or, if you prefer the historic calculation, a troy ounce equals 20 pennyweights. And as long as we are discussing history, pennyweights ands troy ounces are leftover measurements from the town of Troyes, in medieval France.

Reasons For the Increase in Gold Prices

Because of gold’s historical value, its worth cannot be affected by the inflation of cash currency. This ‘inflation proofing’ makes it a secure long-term investment. A trend in global economics seems to suggest that when people doubt the security and value of paper money, they begin to purchase gold. When enough people start to buy gold, its price per ounce increases. This is what occurred from 2002 to today, where economically unstable times, the crash of the housing bubble, and cash inflation has caused people to seek out more secure investments.

Where Are We Headed?

Recently, there has been an explosion of people and governments who buy gold across the world. The Chinese and Indian governments have began to purchase gold in large amounts, leading some to think that gold prices will skyrocket once again. If the U.S. dollar recovers and stabilizes, the price of gold will likely descend. However, if it does not, it is possible that gold prices will continue to soar (some estimate $5,000 per troy ounce) and become the world trade currency once again.