Technical securities analysis comes in many forms, but the basic concept is that market elements can have a greater effect on a security’s price than underlying fundamental economic factors. 1 While academics have long argued about its effectiveness, such an august entity as the Federal Reserve  published a study as far back as 2000 on the effectiveness of technical analysis for currency markets. 2 Recent evidence suggests that the dollar is poised for a major crash.

The dollar has breached some key technical indicators, which do not bode well for the currency in 2018:

This theory dates back to the early 1900s when a trader named W.D. Gann noticed that when many securities in his portfolio reversed a downtrend in a big way, they usually did so after losing 50 percent of their previous high. 3 Those securities that did not reverse the trend after losing 50 percent were typically on their way to a major reversal. Last week, the dollar closed on Tuesday at its 50 percent retracement level, then Wednesday it collapsed through to lower territory.

Analysts list $1.25/€ as a key level for the common currency. Last week, the euro hovered around $1.25, which historically has indicated that the currency was set to go on a bull run against the dollar. 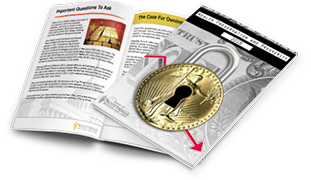 Learn how to protect your profits now! Get the FREE Profit Protection Guide!

Trend-followers have been building long positions since the yen broke through 111.06¥/$. Each time the currency surges against the dollar, those positions get bigger, which indicates growing market belief in a stronger yen versus the greenback.

The Intercontinental Exchange (ICE) U.S. Dollar Index appears ready to break through its 200-day moving average. 4 In both 1986 and 2003, the breach of this indicator led to a further drop of 25 percent in the following years for the dollar.

In an interview with Bloomberg News, Eisuke Sakakibara, the former Vice Minister of Finance for International Affairs in Japan, also known as “Mr. Yen,” called for the dollar to head to 100¥/$ by the end of 2018. 5 His logic is that the dollar has peaked in value and is now on the down trend, as U.S. growth nears the end of a historically long growth cycle. According to Sakakibara, as U.S. growth slows down, dollar drops against most currencies will occur, particularly the yen. He points out that this trend is already in evidence but will continue unabated throughout 2018.

Whether you are a believer in technical analysis or not, it’s hard to imagine that this historically long economic growth trend and the corresponding strength of the dollar can continue much longer. After a long bull run, markets eventually start to misprice risk or also just run out of steam, and capitalist economies are heavily market-dependent. Certainly, there’s no denying that the unprecedented use of loose monetary policy has quite probably prolonged the expansion well past its reasonable life span. Expect both the economy and the equities markets to have a major correction in 2018, making it a great time to look at putting your money in the financial safe haven of precious metals.