Precious metal investors who like to protect their assets against market fluctuations and who wish to diversify their portfolio by including coins from different countries. Investment coins must have a minimum purity of 900 thousands and need to be legal tender in their country of origin. Foreign bullion coins can have higher purity or especially intricate designs. The Austrian Mint (German: Münze Österreich) produces a variety of high-grade coins, among them the popular Vienna Philharmonic coin and the Maria Theresa Thaler. The first coins that circulated in the area that is now Austria were minted by Celtic tribes in the 2nd century B.C. and modeled after Greek and Macedonian coins. Several mints in today’s Slovenia minted the silver coins traded the region until the Roman occupation introduced Roman coins. The Middle Ages brought the Carolingan money system including pfennigs and German Denars to Austria, and the first coins were minted on Austrian territory in the 10th century. When trade and commerce flourished a couple of centuries later, coins with a higher nominal value, like the Kreuzer, the Groschen, Ducats, and Gulden, were produced. Gold coins experienced a revival in the 14th and 15th century, and the first Austrian Gold Gulden coins were struck at the Judenburg mint. The rise in European silver production and inflow of American gold rendered the Thaler, a silver coin, the predominant means of payment in the 18th century. The mercantilist reforms under Empress Maria Theresa introduced the Convention coinage standard, as well as copper coins and paper money. After the dissolution of the Austro-Hungarian Empire in 1919, the Corona became the currency of Austria until the introduction of the Schilling in 1925. After the adoption of the German Reichsmark during the German occupation, Austria returned to the Schilling after WWII until the introduction of the Euro in 2002.

The Austrian Mint is world-renowned for its production of high-grade precious metal coins. This traditional mint has been striking coins for more than 800 years. It produced the coins of the Austrian Schilling until 2002, when it began minting Austrian Euro coins. Moreover, the Austrian Mint is known for striking popular gold coins, such as the Vienna Philharmonic coins and the Maria Theresa Thaler. The Vienna Philharmonic Gold coin meets the 24-karat pure gold standard and is therefore an excellent investment coin. However, if you wish to purchase more affordable options, consider Austrian alloy gold coins like the 100 Corona coin or the Gold Ducat coin. If these coins are re-struck, they have a 1915 mint date and are relatively inexpensive; yet, pre-1915 dates may have a high rare/numismatic value. Furthermore, the Austrian Mint also produces are rare Silver Philharmonic coin (with a purity of 99.99% fine silver) which is also the only silver coin denominated in Euros.

Due to the Austrian Mint’s unmatched reputation regarding tradition, quality and craftsmanship, demand for Austrian coins, especially the Vienna Philharmonic Gold, is generally high. In fact, it was the best-selling coin worldwide in 1992, 1995 and in 1996. Until 2002, when the Euro currency was introduced, the coin was issued a value in Austrian Schilling. Since then, all Vienna Philharmonic coins have been issued a value in Euros. The coins’ weight, purity, and face value are backed by the Central Bank of Austria. Whether you wish to purchase a legendary Vienna Philharmonic or a more durable alloy gold coin, Austrian investment coins will certainly satisfy you. Contact a SBC Gold representative if you have further questions on Austrian precious metal coins or look below for various coin options and availability. 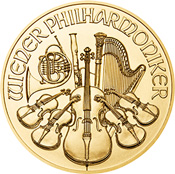 The first ducats issued by Austria were produced in 1612 and probably earlier. The Austrian Mint ceased issuing ducat coins in 1914 during the last years of Franz Joseph I, emperor of the Austro-Hungarian Empire. One and 4-ducat coins issued 1915 are still being produced by the Austrian Mint as official re-strikes. It is important to note that none of the 1915 dated ducats were actually struck in 1915. All of the 1915 re-strikes (of which 996,721 were struck between 1920 and 1936) are worth their weight in gold; thus, they are considered a bullion rather than a numismatic coin. 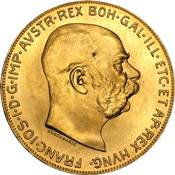 The Austrian 100 Corona was among the first gold bullion coins available to Americans after private ownership of gold had been legalized again in 1974. The 100 Corona was still being minted after its circulation in Vienna – with the 1915 mintmark – allowing Austrians to take advantage of a grandfather clause in the law concerning private ownership of gold bullion. Original 100 Corona coins with earlier mint dates are in fact very rare.