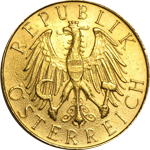 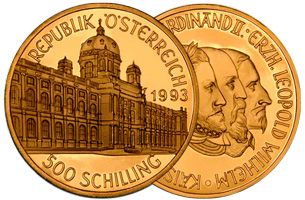 Gold 25 schilling coins were issued from 1926 to 1938. It has been estimated that 276,705 gold 25 schilling coins were minted during that period. The obverse side shows the Imperial Eagle of the Austrian Republic, holding a sickle (to represent agriculture) and a hammer (to represent industry) in each talon. The eagle’s breast is covered with an Austrian shield. The words “REPUBLIK ÖSTERREICH” (“REPUBLIC OF AUSTRIA”) are surrounding the eagle. The reverse side features the denomination “25 SCHILLING” between two edelweiss sprays, as well as the mint year at the bottom divided by wheat springs. The name of the coin designer Hartig in small letters can be found at the bottom of the coin, too. There is another obverse design that features St. Leopold, the patron saint of Austria, on plinth, holding banner with arms of Lower Austria and a model Abbey. The St. Leopold coin was issued by the Austrian Mint from 1935 to 1938.

In 1976, the Austrian Mint issued a gold 1000 schilling coin to commemorate the 1,000 anniversary of the start of the Babenberg Dynasty. It was the first time the Austrian Mint ever produced a coin with such a high face value. The obverse design of the coin features the Imperial Eagle whose breast is covered with an Austrian shield and which holds a hammer and a sickle in its talons. Beneath the eagle is the denomination “1000 SCHILLING.” The words “REPUBLIK ÖSTERREICH” (“REPUBLIC OF AUSTRIA”) is surrounding the eagle. The reverse depicts the Seal of Duke Friedrich II: a knight carrying a pennant on horseback. The dates of the anniversary (976-1976) and the words “EINSETZUNG DER BABENBERGER” encircle the seal. While the obverse side was created by Martha Coufal-Hartl, the reverse was designed by Gertrude Simon. However, there have been at least eleven different designs and types of gold 1000 schilling coin, as well as at least seven different specifications. For instance, the Austrian mint issued gold 1000 schilling coins commemorating the Olympic Games, Empress Maria Theresia or the Second Republic.

Any gold schilling coins is a supreme investment vehicle. The Austrian Mint is one of the most reputable mints in the world, known for their unmatched artistry and craftsmanship. Whether you decide to acquire the 25, 100, 200, 500, 1000 or even 2000 schilling coin, the gold schilling will be a fantastic addition to your precious metal portfolio.