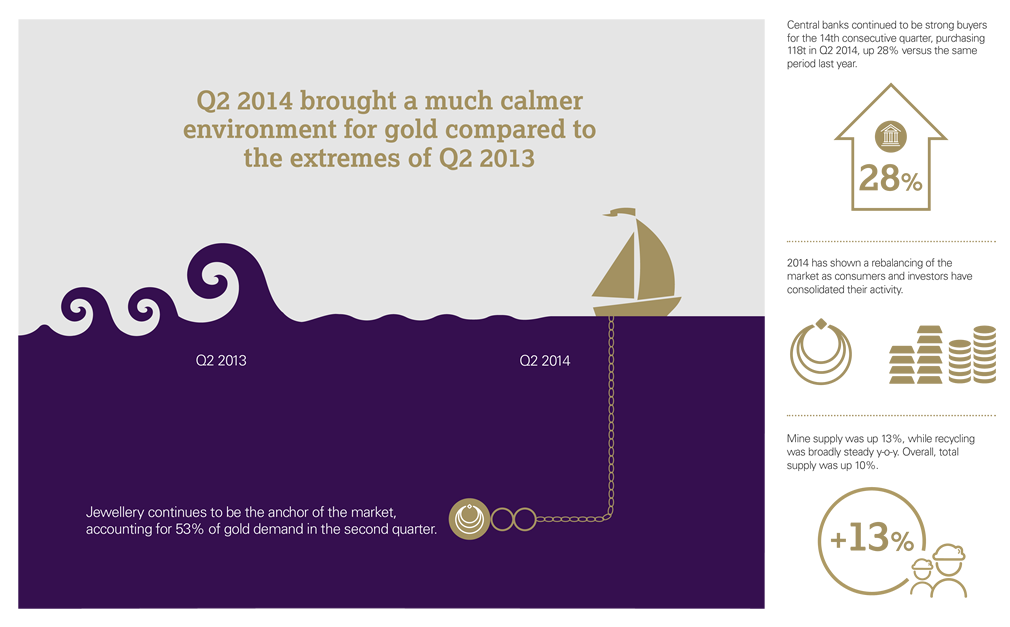 Technology demand, which only makes up a small percentage of total gold demand, fell by 3.0% in year-over year comparisons. The technology demand for gold in quarter two of 2014 was 101.0 tons as compared to the 103.8 tons in quarter two of 2013. While growth in semiconductor production was positive for demand, it was offset by weakness in the use of gold in bonding wire, dentistry, and other industrial and decorative uses. Users sought more affordable substitutes such as silver and some base metals.

Net outflows from gold ETFs were only down slightly by 39.9 tons in Q2 of 2014, a big improvement over the 402.2 ton outflow in Q2 of 2013. The data appears to confirm the more balanced approach that institutions and high net worth investors are taking as they ponder the outcome of geopolitical events and the economic outlook for the world.

What The Gold Demand Report Tells Us

The WGC report tells us that demand for gold has declined, but it also mentioned that new supply is declining. Essentially, the report suggests that gold prices have reached an equilibrium point – which is why prices have been hovering around the $1,300 mark for the better part of a month. As gold coin investors, you never know when some external event will spike demand. It is always good to be prepared, diversify, and have a portion of your portfolio in precious metals.

Learn how to diversify your portfolio with physical gold. Get our Gold Investment Guide Free! – Click Here