The cartoon shows a “Recipes For Disaster” cookbook lying on the ground and a resulting scene of chaos. So, considering the current state of inflation and falling purchasing power of the dollar, one has to wonder whether the Federal Reserve is taking its cue from the very same book. Why? Because the Fed has to raise interest rates in an attempt to stem mounting inflation, and this act will not be well received by an economy and markets already in the process of rolling over. As a result, the raising of rates by the Fed will be “short lived” and inflation will continue to advance as a result of an out-of-control debt, trillions of dollars thrown into the system AND commodity supply side shortages that are firmly in place and expected to worsen this summer. Ironically enough, interest rates should/will continue to rise regardless of Fed action, and unfortunately the average Joe on the street is simply not prepared. 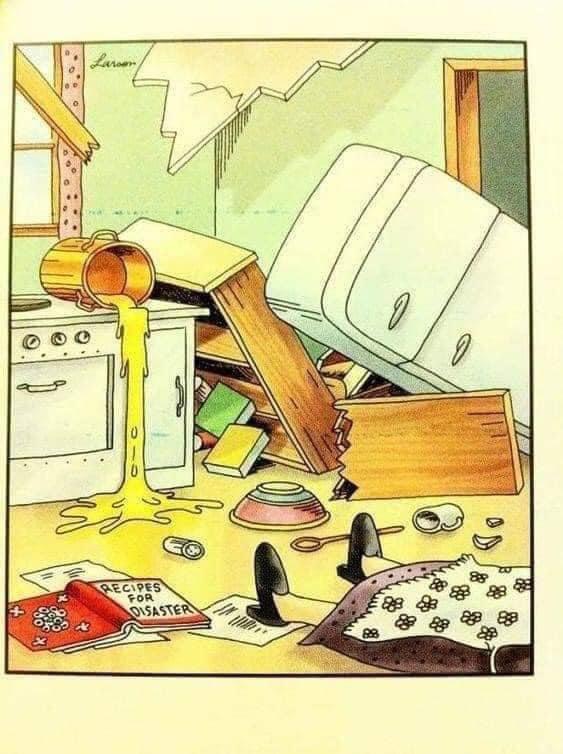 A lot of heads were turned last week when JP Morgan CEO, Jamie Dimon, mentioned bracing yourself for an “economic hurricane”, and Tesla CEO, Elon Musk, said he has a “super bad feeling” about the economy. Now add ‘The Big Short’ investor Michael Burry to the list. For those not familiar, Burry was one of the few that predicted well in advance the coming mortgage crisis in 2008, and in the process made a staggering fortune. Now Burry, who for several years has been putting out warnings of pending massive inflation, is drawing parallels to Germany’s hyperinflation in the 1920’s and US inflation in the 1970’s. Michael Burry even went as far to blast President Biden, the Fed and the Treasury for their pandemic policies AND called them “ignorant of history and scarily unaware of the inflation risks.”1

Along the same line of thinking, London analyst Alasdair Macleod has been warning for some time now of an economy being held up by unlimited credit and trillions of dollars created from thin air. When Macleod said this week, “Things are happening which are changing the landscape”, he was alluding to Dimon’s concerns, and believes we are going to see a massive contraction of bank credit. Regarding the markets, this contraction is ominous because over the years banks had expanded credit lines to finance market speculation. With the bubble now popping, banks have started pulling the plug on financial assets stocks and bonds. According to Macleod, this changing of the landscape “guarantee’s a bubble top bear market.” Macleod says we have a long way to go yet, but as the bubble bursts, “things could start moving very, very quickly.”

Leigh Goehring and Adam Rozencwajg, both natural resource experts, had the following to say this week, “This will be the decade of shortages. Given the significant amount of money printed and the huge amount of debt accumulated throughout the world, we believe inflation will intensify as we progress through the decade. The surge in commodity prices is basically causing the first stage in this inflationary cycle. Although inflation-sensitive assets have already begun to radically outperform bonds and the general stock market, investors’ interests in these assets remain subdued. Very few investors have taken serious steps to protect themselves from the massive trend change. This means there is still plenty of opportunity to not only protect yourself from the ravages of inflation, but to profit by it as well.”

Last week, it was announced the CPI reached 8.6% for the month of May, and soon after Fortune put out a piece quoting a number of investment strategists. “The numbers are catastrophically bad for Americans and the policymakers in Washington,” says Nancy Tengler, CEO of Laffer Tangler Investments. “The Fed is bluffing,” said Greenlight Capital’s David Einhorn, “Inflation ain’t going away so fast. The Fed doesn’t really have the tools to stop the inflation.” And finally, Nancy Davis, founder of Quadratic Capital Management, stated, “There’s little clarity as to how quickly any rate increases would work considering the impact of factors outside of the Fed’s control. It’s still unclear how effective tighter monetary policy will be in pushing inflation down, which is largely being driven by supply chain disruptions, which have only worsened since the war in Ukraine that is showing no signs of ending.”