While many mint state or proof Morgan silver dollars sell at auctions for thousands of dollars, the value usually drops to a figure much closer to just the melt value of the silver for circulated coins. That is even true of AU (Almost Uncirculated) examples that retain all of their details. Typically, coins gain value because of their rarity or condition, but some coins might benefit more from one than the other.

In the case of one MS-68 Morgan CC, the auction price benefited from both scarcity and condition. It might be somewhat surprising to learn from Coin Update that an MS-68 1889 CC Morgan silver dollar sold at auction in 2013 for almost $900,000, but it was the finest example of its kind that had ever been found, and this date and mint mark are extremely rare in all conditions.

It is interesting to note that a previous sale of that same coin, in 2009, collected $531,875, but that was right in the middle of the Great Recession when many collectable coin values were depressed. Still, the auction value of this coin increased dramatically in less than five years.

However, collectors might find it even more surprising that even some circulated Morgan silver dollars, engraved with that rare date and mint mark, sell for thousands of dollars. This high valuation might also be somewhat disappointing for collectors who want to complete a set but lack the budget for very expensive coins.

It’s not just the Carson City mint mark raising the value either. Of course, the CC tends to inflate the value of a Morgan silver dollar from any year that mint produced silver coins. If you try to buy an 1890 CC Morgan, for example, you might pay about $75 for a coin in G condition and $360 for an AU-58. 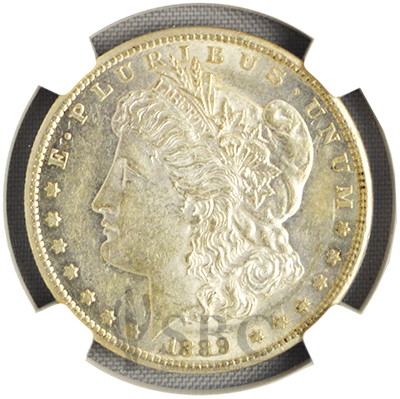 The Carson City Mint had been closed for four years before 1889, and it did not open until the third quarter of that year. Because the mint had been closed, crews had to clean the offices and machinery before production could begin. That year, the mint only produced 350,000 coins, and all of these coins came out in the last three months of 1889.

Additionally, according to estimates, only 100,000 to 25,000 of these dollar coins avoiding getting melted down for silver. Most of the few remaining coins got heavily circulated, and many of the existing examples have damage. Any examples of 1889 CC Morgan silver dollars are scarce, but typical examples have grades of VF or worse. Many have damage.

Even though these coins are silver, if you find one in decent condition, it’s likely that you just struck gold. The current economy inspires many investors to look for alternative investments. Nationwide, more people than ever seem to invest big dollars in collector’s items such as rare coins, rare cars, rare artifacts and rare artwork. The top end of these markets has been flourishing because of big money investors scrabbling for tangible assets.

The reason these investors are so attracted to these kinds of purchases is that their value is recognized in any economic climate. Even during the German invasion of Europe in WWII, the riches that were the most sought after by the Germans were not only Europe’s gold, but also Europe’s rare art and artifacts.

So, if you have never considered owning coinage that has immense value because of its recognized rarity, perhaps you should now. You don’t need to be an expert to participate in rare coin investing, you can contact Scottsdale Bullion and Coin and have a Precious Metals Advisor show you how to get involved and what types of coins have the best chance for future returns.

Want to Learn More About Investing in Rare Coins?