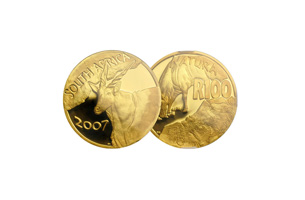 The Natura Series was South Africa’s first fine gold (24 carat) series, and was first released by the South African in 1994. The Natura Series is issued in limited mintages every year. The designs are inspired by South African wildlife and each edition showcases an animal native to South Africa. Natura coins are produced in four sizes: 1 oz, ½ oz, ¼ oz, and 1/10 oz. Previous designs have incorporated endangered species, animal families, and monarchs of Africa. Part of the proceeds from the coin sales have been going towards the preservation of endangered species.

The obverse design of a Natura Series gold coin usually consists of an animal, the mintage year, and the inscription “SOUTH AFRICA”. However, the reverse design varies each year, sometimes displaying the weight and purity, with the engraving “NATURA” concealed somewhere in its design. For example, the 2014 coin depicting the leopard family shows a leopard, the mint year, and “SOUTH AFRICA” on the obverse side. The reverse side features the denomination (“R100”) and “NATURA”, as well as different depictions of the leopard family.

All Natura Series gold coins are officially certified and deemed legal tender by the South African Mint. The series also comes in special sets; the most recent one is the Mandela Palladium Endangered Species Set which is available in two different versions (375 mintage each), the 1/2oz Mandela Palladium Medallion with either a White Rhino Gold Coin or a Black Rhino Gold Coin packaged in a wooden box.