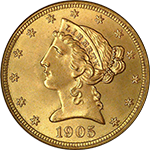 The U.S. Mint struck the Liberty Head half eagle from 1839 until 1908, rendering it a common form of currency during many notable events in U.S. history. Probably most significant of all was the Civil War, which resulted in the death of hundred of thousands of soldiers and the destruction of much of the South’s infrastructure. While the years prior to the war had been marked by numerous political conflicts, the Reconstruction era was an especially dreadful time that left many disillusioned with the nation’s state. These trying decades influenced the development of half eagle’s design.

Christian Gobrecht, the third person to have the position of Chief Engraver of the U.S. Mint, designed the Liberty Head half eagle. In the early 1800s, Neoclassicism — an art movement inspired by Ancient Greek and Ancient Roman art and culture — was very en vogue and influenced the design of the Liberty Head. The obverse side features Lady Liberty’s bust facing left, evoking classical Greco-Roman portraiture. Her hair is held up by a coronet bearing the inscription LIBERTY (the coin is also called “Coronet”). In addition, the obverse side features 13 stars circling the rim, representing the original 13 colonies. The mint date is located at the bottom, right below Liberty’s head.

The reverse has a variation of the spread eagle design that can be found on many U.S. coins. The eagle wears a shield and clutches a bunch of arrows as well as an olive branch. The inscription “THE UNITED STATES OF AMERICA” encircles almost the entire rim of the coin. The bottom features the coin’s denomination, expressed as “FIVE D.” The mintmark can be found right above the denomination for most years. However, the C and D mintmarks of 1839 were pressed above the date on the obverse, making that date and year popular with collectors. NGC 1 explains that there are two versions of the Liberty Head half eagle, “No Motto” and “With Motto.” The motto in question, “IN GOD WE TRUST,” did not appear on the reverse (above the eagle’s head) until 1866, just after the end of the Civil War and President Lincoln’s assassination. Including the motto be was considered as a sort of optimistic prayer that the country would heal over time.

The Liberty Head is actually unique in that it is the only coin that was produced at all seven mints. The No Motto version was minted in Philadelphia (no mintmark), Dahlonega (D), Charlotte (C), San Francisco (S), and New Orleans (O). The With Motto version was also produced in Carson City (CC) and Denver (D). Collectors may want to note that D on No Motto half eagles stands for Dahlonega and not Denver. According to the Georgia Visitor’s Center, this branch opened in 1838 and closed at the beginning of the Civil War.

Overall, every single date of the Liberty Head half eagle series is rare. As mentioned before, No Motto half eagles minted in Dahlonega and Charlotte are especially rare, particularly the 1842-D Large Date, the 1842-C Small Date, and the 1861-C. The rarest regular No Motto issue is the 1854-S, as San Francisco only struck 268 coins of which only three pieces are known to have survived. The only issue that is relatively common due to its high mintage is the 1873 Philadelphia one.

Even in fairly low grades, sources such as NGC price guides 2 list higher values for examples of Liberty $5 gold coins than the current melt value of the gold. As is true of many older gold coins, the value increases dramatically with dates and mintmarks that are scarce or with coins found in higher grades. While these collectable coins are not eligible for a gold IRA, they can be very attractive to gold coin collectors as they represent a long and very significant portion of American history from the middle of the 1800s to early 1900s.