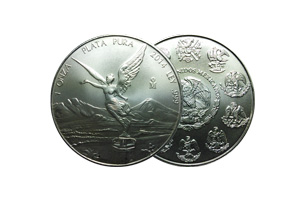 The obverse of the coin displays the Winged Victoria, the symbol of Mexican independence, sometimes also called the Angel of Independence. Representing Mexico City, her statue is located in the Paseo del la Reforma in the Mexican capital. The Winged Victoria is standing in front of two volcanoes, Popocatépetl and Iztaccihuatl, which were named after a Pre-Columbian legend of two doomed lovers. Popocatépetl, a warrior, fell in love with Iztaccihuatl, a king’s daughter, and was granted a tentative marriage blessing from the king – on the condition that he would win a battle against a rival tribe. While the warrior was away on the battlefield, a rival suitor spread the rumor that Popocatépetl had been killed; as a result, Iztaccihuatl died of a broken heart. Upon his victorious return, Popocatépetl discovered his dead lover and buried her on top of a mountain range, which then assumed the shape of a sleeping woman. Overcome by grief, the warrior climbed an adjacent mountain to keep eternal watch over his beloved. The reverse of the coin displays the Mexican coat of arms in the center: a Mexican golden eagle perched upon a cactus with a snake in its beak. The eagle serves as a symbol for both the old Aztec city Tenochtitlan, which is now the location of Mexico City, as well as the triumph of good over evil. A wreath and the motto ESTADOS UNIDOS MEXICANOS surround the eagle in the center. Furthermore, the contemporary coat of arms of Mexico is surrounded by ten historical coats of arms.

Unlike most other countries’ official bullion coins, the Mexican Libertad does not have a face value. When the U.S., Australia, Austria, and most other governments produce official bullion coins, they usually assign them a nominal face value and grant them legal tender status. Normally, a coin without legal tender value is called a round; any mint can produce a round, but only a government can issue a coin. Thus, the Libertad is an exception in that they are government-issued bullion coins without carrying a face value. Similar to the South African face-value-less Krugerrand, the Libertad is intended to be bought, sold, and traded based on the intrinsic value of its precious metal content.

These are specifications for various weights of these .999 pure silver coins:

The Silver Libertad is a good option for silver coin investors. Unlike many similar bullion coins, they are not produced to a pre-announced limit, but mintage quantities have typically been fairly limited. Still, recent mintages may sometimes be found for very little over their bullion value. At the same time, some older years can be fairly hard to find, scarce, and appreciating in value; unlike most other silver bullion coins, Silver Libertads can be considered collectable coins in their own right. Lastly, the Mexican Libertad silver coin is also eligible for a precious metal IRA.