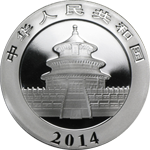 The Silver Panda coin is issued in several different types: uncirculated, proof, gold plated / gilded (either side or both), colored (only obverse side known), privy marked for different distribution (like D for domestic market), and privy marked for commemorative issue (which also can be gold plated). Each year, only 10,000 of these silver coins are being produced and are thus quite difficult to come by. Unlike, for example, U.S. American coins, Chinese coins don’t normally carry mintmarks indicating their origin. In some cases, minor variations like the size of the date or the style of the temple reveal where the coin was minted.

The obverse side of the coin depicts the Hall of Prayer for Good Harvest Temple of Heaven in the center. The Mandarin inscription “Zhonghua Renmin Gongheguo” (“PEOPLE’S REPUBLIC OF CHINA”) is located on top, while the year of issue can be seen on the bottom. If the issue is a commemorative issue, the theme is to be found on the bottom as well. The reverse side depicts different portraits of a panda that change every year (except for 2001 and 2002), the denomination, as well as the coin’s weight and purity. For instance, the 2014 Gold Panda coin depicts a panda sitting in the grass in front of a row of bamboo trees, holding a branch.

The Silver Panda Coin is a fantastic option for coin collectors and precious metal investors alike as its price is relatively modest, despite the coin’s rarity. The eye-catching design and flawless quality of the Silver Panda have made the Chinese coin one of the finest and most desired silver coins in the world.