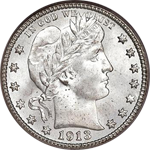 Struck in large quantities between 1892 and 1916, there are a few scarce Barber quarter mint marks and date combinations, but there are not many that are truly rare. This is especially true for those who are willing to accept circulated examples of some of the scarcer dates. In the late 1880s, amidst an economic depression, Mint Director James P. Kimball stated that U.S. coinage was out of date and should be changed. By that time, the Seated Liberty coins had been used for at least 25 years. After organizing a disastrous competition that he had opposed all along, Chief Engrave Charles E. Barber decided to design the new coinage himself.

The Barber quarter, as introduced in 1892, features the right-facing profile of Lady Liberty on the obverse. She is wearing a Liberty cap with a laurel wreath, and her hair is tied back with ribbons. The motto IN GOD WE TRUST is located on the top, while the mint date is found below. Furthermore, there are 13 stars for the original colonies surrounding Liberty’s head. The initial of the designer (B) is located at the base of Liberty’s neck. The reverse side of the coin features the heraldic eagle with spread wings, holding 13 leaves in its right talon and a bundle of 13 arrows in its left. There was also a ribbon with the motto E PLURIBUS UNUM held in the eagle’s beak. Moreover, the reverse depicts the face value (QUARTER DOLLAR) across the bottom, and the inscription UNITED STATES OF AMERICA across the top.

Barber was not pleased with the coin work that Saint-Gaudens did previously. It might be easy to dismiss this as jealousy since Saint-Gaudens was more popular with both the public and President Theodore Roosevelt. However, in defense of Barber, he did have a valid argument when he pointed out that the intricate details and high relief of Saint-Gaudens coins made them slow and difficult to produce. While Barber’s coins generated some criticism for being plain, Charles E. Barber may have designed his work with practical reasons in mind. By that time, Barber as the Mint’s Chief Engraver, had practical experience designing coins for circulation. In the end, he did change the Saint-Gaudens to make it a bit flatter and easier to produce. In any case, Barber quarters still survive as popular collector’s coins because they are 90 percent silver and accessible and available, especially in circulated condition.

The striking of Barber’s was actually very innovative. First, large cameo models made of wax and resinous were produced and then electroplated. The cameo model was put into a pantograph or transfer lathe, transferring the design to a master hub that had the size needed for the specific coin. This groundbreaking technique was more precise and able to include more design elements. It also allowed for fast striking of large quantities of coins.

The mintmark, if any, is right below the eagle’s tail on the reverse. Barber quarter mintmarks are D, O, and S for Denver, New Orleans, and San Francisco, respectively. As is typical with American coins, the lack of a mintmark means that the coin was struck in Philadelphia.

Like other coins in the Barber series, the survival of many of these quarters into the present day can be attributed to three main factors. First, the Mint sent millions of these quarters into circulation, and they remained in use for many years. In addition, American author, artist, and numismatist A.G. Heaton popularized coin collecting by publishing a detailed study of coins and mintmarks in 1893. This newly discovered hobby received another boost in the 1930s, when companies began to print and sell collecting folders in the 1930s while there were still plenty of Barber quarters in circulation.

The Barber Coin Collector’s Society reports that the three key dates are 1911-S, 1896-S, and most of all, the 1901-S. Since many forgeries of these three issues have been found, collectors and investors should to make sure that the coins they purchase are genuine. Some interesting variety coins to look for include the 1892 and 1892-O double-die reverse and the 1962-D repunched mintmark.

In 1916, the Mint organized a new contest to replace the Barber quarter design, as it had been in production for the required minimum of 25 years. This time, the contest was in fact successful, and a design by Hermon Atkins MacNeil was introduced. The Standing Liberty quarter went into production in late 1916, but the Barber quarter remained in circulation until well into the 1950s.