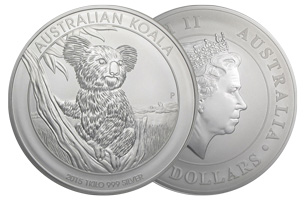 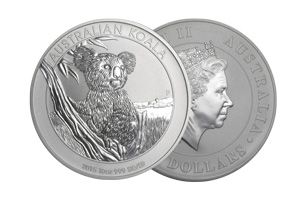 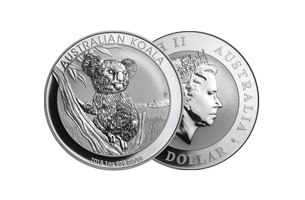 Similar to kangaroos, koalas may be one of the most iconic Australian animals. To celebrate this Australian native animal, the Perth Mint began to release one of the most popular silver coin series ever in 2007. The Australian Koala Silver is available in 1kg, 1oz, 1/2oz, and 1/10oz. In addition, the Perth Mint produces a one-ounce coin with decorative gold gilding. All of these coins in this series are made of fine silver.

The obverse side of all coins in the series features a profile of Queen Elizabeth II, facing to the right. The inscriptions of ELIZABETH II and AUSTRALIA, as well as the denomination circle the coin’s rim. The reverse of these coins changes every year, showcasing a different image of koalas by a different artist. Typically, the reverse side depicts the marsupials in their native habitats in natural positions. For example, the 2007 coin features a koala holding onto a gum tree branch, while the 2011 issue shows an adult and a juvenile koala, called a joey, sitting in an eucalyptus tree. Around the rim, the inscription AUSTRALIAN KOALA is located at the top while mint year and purity are found at the bottom.

All coins from the Australian Koala Silver Series are made of .999 fine silver.

While the Koala Silver is primarily a collector’s’ coin, it is also legal tender in Australia. However, the silver value of the coin can be much greater than the face value. The Koala Silver’s mintage numbers have varied quite a bit from year to year. Decisions about production might be based upon demand, silver price, and other market factors. For instance, in 2007, the Perth Mint produced 137,768 coins; in 2008, it only struck 4,368; and in 2009, Perth minted 336,757 pieces.

Investors covet Koala Silver coins mostly because of the intrinsic worth of their metal content. The appealing subject and the annually changing design have also made them popular with some collectors. Yet, Silver Monthly cautions investors to be wary of paying too much for a Koala Silver coin just because it features a cute image. While these are considered collectable coins, they are not rare coins, even if some issues come in small mintages. Yet, the current affordability of silver and the variety of available weights enables collectors with almost any budget to acquire this series. Furthermore, Koala Silver coins are eligible for a precious metal IRA, too.